Singing games in the music room 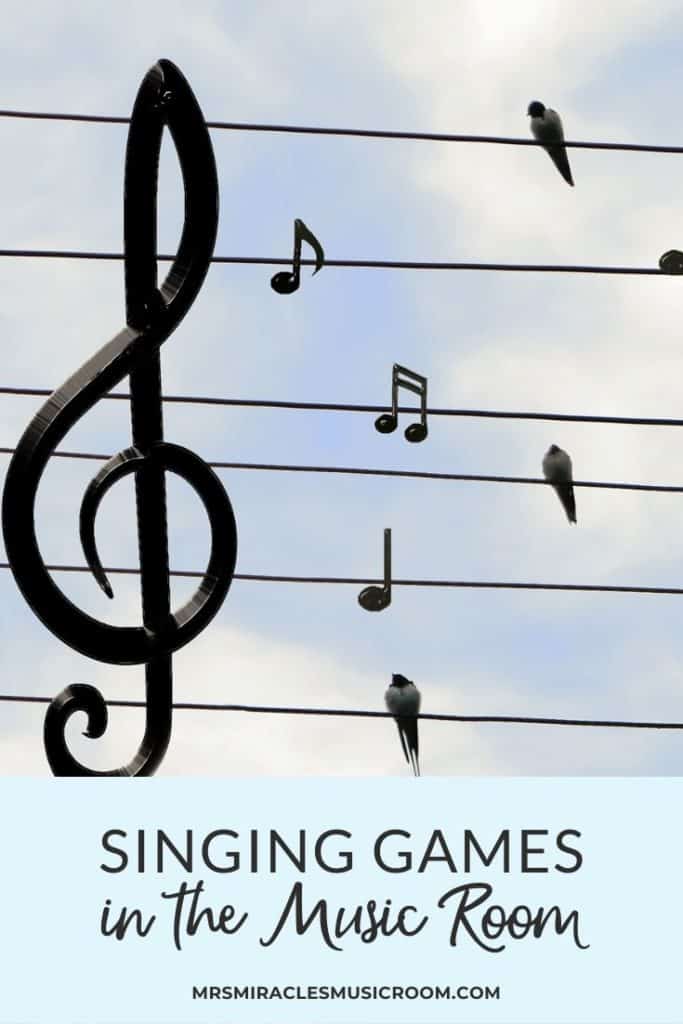 Today, I'm blogging about singing games in the music room: why use singing games, how to keep track of turns, and more, as you plan your next school year!

This is probably the best piece of advice I've received about games, and it was from my Kodály Level I instructor, Julie Swank. Previous to level I, I would play a game until EVERYONE had a turn…you know, to be fair. But what ends up happening is that the game drags on for SO long that most of the kids are bored by the end. You never want them to feel bored! So leave them wanting more. Play the game 3-5 times, and move on. Will you hear complaints that they didn't get a turn? Yes. Will they want to play it next class because of that? Yes.

That being said, sometimes, when I have a few extra minutes at the end of class, and the class has been well-behaved, we play that game again, the one they were disappointed that it was cut short! Mrs. Macaroni is a huge favorite with first grade, one that they beg to play if we have time, and of course there are many others kids just LOVE to play! Another option is a reward day, which I've written about here. This gives them an opportunity to play games JUST to play!

There are lots of running games, which are SO fun to play, but I've heard music teachers here and there say that they don't let their kids run. Now, you may not have a room conducive to running, so fast walking it is. But if you do have a big room, as long as you make sure there aren't music stands or instruments in the way, I personally think it is totally fine to have them run. Have I ever had a kid get hurt? A few times. (Actually, I've had a kid get a bloody nose from “Our Old Sow” simply from changing the directions of his arms, not from running!) But do kids get hurt at recess? Of course they do! Should we stop them from running at recess? Please, no.
That's my take on it. I've taught for 17 years, and nothing bad has happened from kids running in my room. And they've had FUN!
Now, if you are still hesitant, and/or you don't have a huge room, you could take my friend Andrew Ellingsen's advice and have them run on their heels. It stops them from running full-speed and is still a fun challenge! (And if you've never seen Andrew present, you really should…he is AMAZING!)

#4: Teach them more than one version

You know how there are often seventeen different games for one song? Well, that might be an exaggeration, but there are easily 2-3 for most singing games I know. I have typically just decided which one game I like and taught it to the students, but in the past year or two, I have at times taught students more than one version. It's fun for them to see there is more than one thing we can do with any given song, and then once they know more than one version, they can vote on which they'd like to play! It's an easy way to allow students to choose, and it broadens their horizons a bit!

In the past, I have simply chosen students each class to be “it.” I've asked them to only raise their hands if they haven't had a turn, but inevitably,  a.) a student doesn't remember, b.) a student does remember, but chooses to raise their hand anyway, and/or c.) another student yells out, “He had a turn!”
This past year, I decided to try something different. I bought an interactive attendance set by Pink Cat Studio, and used it for keeping track of turns for singing games. I was going to write out a whole explanation of how I did this, but decided to make a video instead, so you can see how cool this set is! Here is the video:

Since I'm doing a monster theme in my classroom this year, I started off buying just the monster set, but have since bought the bundle. It's so fun, and a great way to keep track of turns!

What are your tips for using singing games? Feel free to comment below, and have FUN!