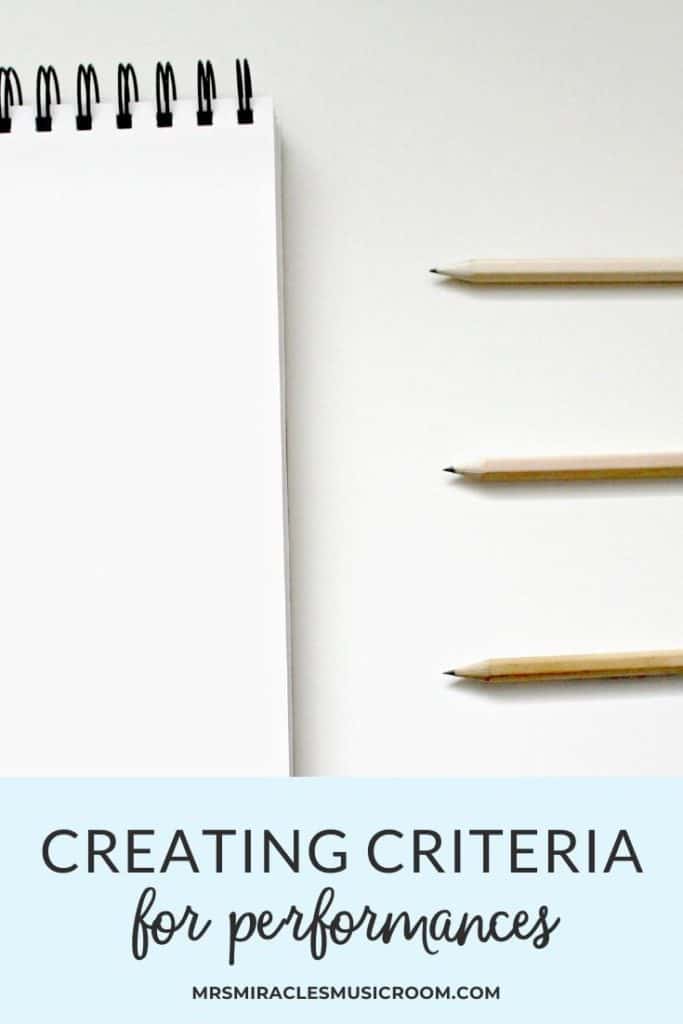 As we approach the end of the school year, I often look at my grade-level indicators at what I wasn't able to cover, or what I wish I had delved into more. It would be wonderful to say we could get to everything, but with music only twice a week for thirty-five minutes, that can be quite a difficult task! One of the benefits of being a music teacher is that unlike classroom teachers, if we need to slow our pace down when we realize that students need more practice, we can without having to worry about how it might impact standardized tests. If we don't get to every single concept we had planned to, then we know where we left off and can teach them that concept the next year. (Unless, of course, you are a traveling music teacher and only have one grade level at a building!)

So this year, I looked at my fifth-grade state of Ohio music indicators, and realized I hadn't really touched upon the indicator, “Develop and apply criteria for critiquing more complex performances of living and recorded music.” I read the indicator over a few times, scratched my head, and thought, “Huh? How do I teach THAT?” I learned so much in my Kodaly training, and throughout all of the conferences and workshops I've attended, but I don't think I've ever been at a workshop or class that discussed how to teach that particular topic.

This was right after my fifth graders performed their program. While I was on jury duty, I had them watch the video of their program, and had them answer, in writing, questions about their performance, such as “What do you think you performed the best?” and “What do you think could have been improved?” They had performed a program I created called, “We Are Ohio,” with music from the many cultures represented at our school. I was very happy with their performance, but of course, it's always great for them to reflect upon what they could improve upon!

This indicator, though, goes deeper than just reflecting upon their own performances. So I decided to have them watch a different performance, this one of the group “Blast.” This is a GREAT group that used to be the Star of Indiana (a group that I auditioned for on trumpet way back in college and almost toured with until I realized how much time in the summer it required… Very cool group!) You can find out more by clicking on the picture below:

I have a DVD of the group (you can purchase them through West Music or many other music education companies), so I had my fifth-grade students watch the DVD. Before we watched, I had them brainstorm questions they might ask themselves as they watch a performance in order to evaluate it. They came up with questions such as:

These were pretty basic questions, so I told them we'd watch a little of the performance by Blast, and as they were watching, they could think of more questions. After we watched a bit, they did, in fact, come up with more complex questions, such as:

One student asked, “Do they make us want to do it?” which after some further questioning, I realized really meant, “Do they inspire us to perform?” Wow…such a great question! The previous year, those same students had performed “The Drums of Noto Hanto,” which was a program I created based on the book of the same name. The students had performed several taiko drumming pieces using bucket drums, and afterward, several teachers said to me, “I want to learn how to do that!” I shared this story with the students, telling them that they had inspired the teachers to perform (which they did…for the end of the year assembly, I taught many staff members a taiko drumming piece by Eric Paton and we performed it for the students. So much fun!)

After we came up with an extended list of questions, we applied those same questions to not only Blast's performance, but their recent school performance. It was so enlightening to see how they answered the questions (they thought Blast showed passion and emotion but weren't sure about themselves, but thought that their performance represented cultures better than Blast. Interesting!)

There are some indicators that take pretty much the whole year to teach, such as the indicators about reading, writing, and performing specific rhythms and solfa. We all know this is not an easy task and cannot be taught in one lesson! In my district, we call these “power standards,” because they are very important and take lots of sequential work to teach well. This indicator I'm discussing is, I believe, not a power standard. Some standards/ indicators can be covered fairly quickly. The catch is, you may have to set aside a typical lesson of singing, reading, writing, etc. so that you can cover that material. The discussion I had with the students was so reflective…I think it was completely worth the time!

Have a wonderful week!