A new way of teaching notes on the treble clef staff 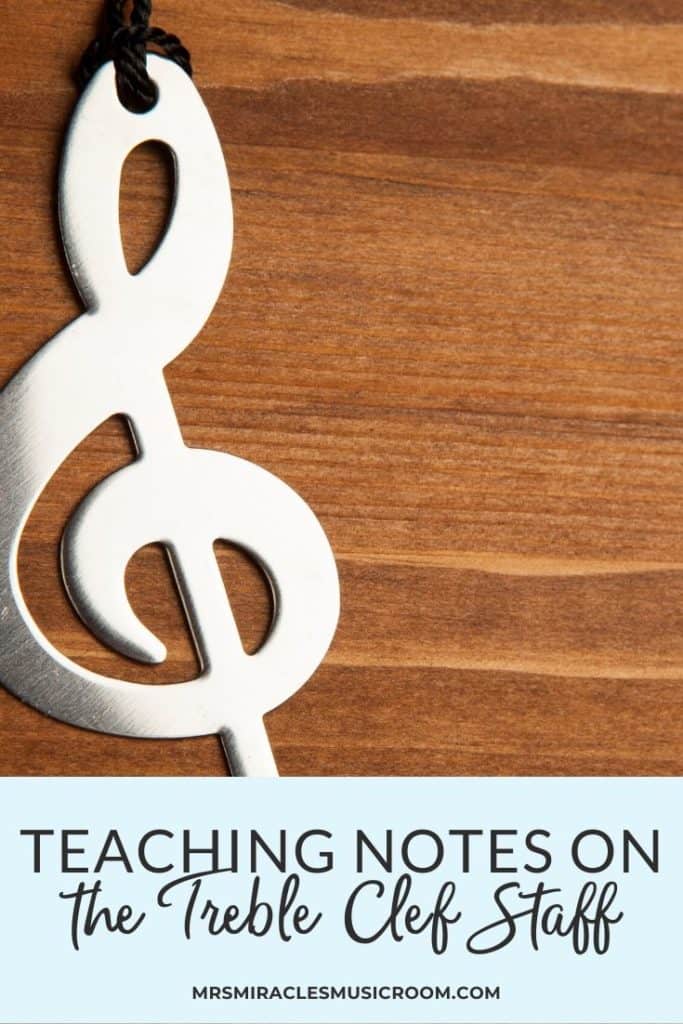 Over the years, I've tried several different ways of teaching the notes on the treble clef staff. For a while, I used the silly sentences (like “Every Good Boy Does Fine” and “Elvis' Guitar Broke Down Friday” for the lines) and “FACE” for the spaces. Then one year I decided I'd show them that the treble clef is sometimes called the G clef because it crosses the G line four times. Then, they had to figure out that the next note was A, the note after that was B, etc. I thought maybe this was better than the silly sentences, but I quickly learned that although some kids get this, it really helps to have the silly sentences, at least at first! So I went back to that way of doing things. I began first getting them comfortable with the musical alphabet, then I would teach the lines/ silly sentences one day, the spaces the next, then I'd do a mad minute with them as a formative assessment. I'd take another day to do learning centers focused on notes on the treble clef staff, and they would do another mad minute as a summative assessment. During this process, my recorder players would transfer this to the recorder, and my band students would transfer this to their band instruments. I've listed these ideas on this blog entry.

These strategies do work well, and the students improve quite a bit. But I still felt like maybe I could do more to help them, as there are always students who really struggle with note reading on the treble clef staff. I also wanted to take some baseline data so I could possibly write an SLO (Student Learning Objective) for this next year. So this year, I'm teaching the treble clef staff in a different way!

After going through all of the musical alphabet activities, and showing them the staff with the treble clef, I told them the silly sentences, but I also showed them visuals. For example, for “Elvis' Guitar Broke Down Friday,” I showed them:

For “Every Good Boy Does Fine,” I showed them:

Then I tried something new–I immediately had them transfer that knowledge to instruments. My fourth graders were working on the recorder, so I showed them this slide and had them figure out it was G, then had them play this pattern:

I had other patterns that used G, E, and B (no A's, because those are space notes and we haven't discussed them yet!) For my third graders who aren't playing recorder yet, we played a bunch of patterns on E, G, and B using barred instruments. I just had to love when one of my fourth graders yelled out after we'd played a pattern looking at the treble clef staff, “We're ROCKIN' the recorder!” I think the fact that they immediately transferred it to instruments helped a bit of the disconnect I've seen in years past.

I thought about going right onto spaces after this, but then thought I'd do it differently this year. Perhaps if I stick with the lines for a while, I pondered, they'd do better in the long run. So we had another lesson in which we played patterns on the lines, and then I did lines mad minute–with notes only on the lines. I was surprised by how much better they did with this than I've seen students do with mad minutes that have lines AND spaces. But I guess it shouldn't be that surprising…if they only have to worry about the lines, then they are just thinking about which line it's on. If they have lines AND spaces to worry about, then they have to think “Is this on a line or space?” first, and then figure out which line or space, and then figure out if they'll use a silly sentence or the word “FACE.” This is much more complicated!

Next week, I plan on doing learning centers, but we will ONLY focus on the lines. One of the centers I'll do is with the app Staff Wars on iPads. It's one of my favorite apps…and you can only choose the lines! Check out this video for an overview of Staff Wars.

While students are in centers, I'm going to work with a couple of students in each group who were struggling with the mad minute, and then we'll do another line mad minute in the next lesson as a summative assessment. Then we'll work on spaces, with the same process. Then I'll give the mad minute for lines AND spaces and see how they do! I'll post about this experiment with data from this year and data from last year as a comparison.

If you're interested in the visuals and mad minutes I discussed above, as well as other activities and visuals, click the link below for my treble clef staff:

I also put together a similar package for bass clef:

Which strategies for teaching treble clef work for you? Feel free to comment below!