Double double this that 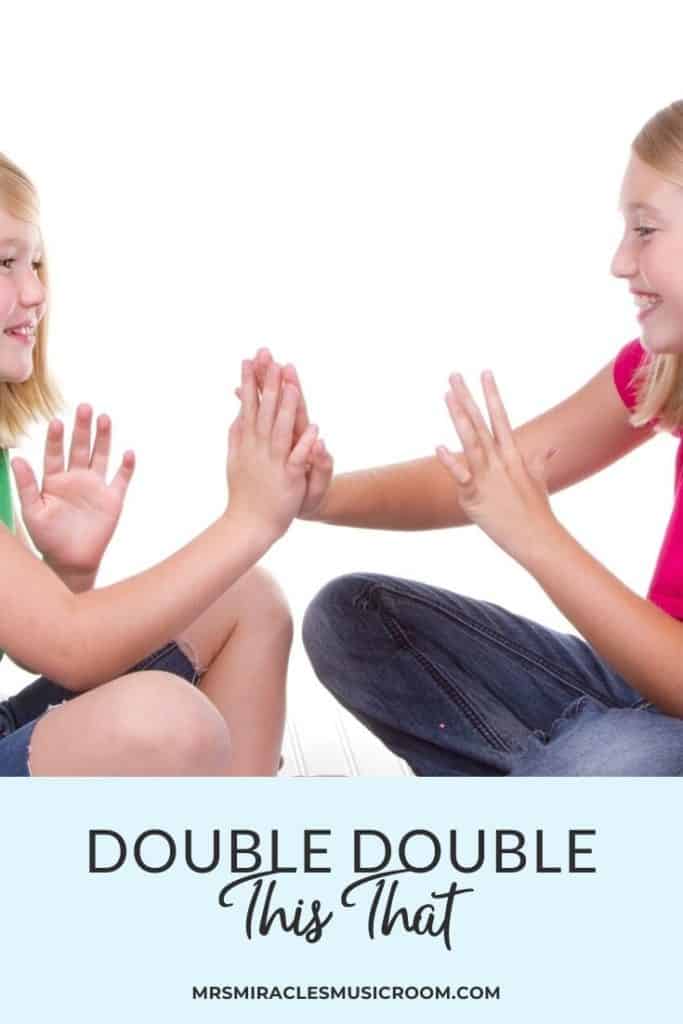 My second year of teaching, I worked with a wonderful P.E. teacher named Laura who enjoyed cross-curricular teaching. Through the curtain, I often heard students doing jump rope games and hand jives. One of my favorites I heard her do was “Double double this that.”

You may have heard it before. It goes like this:

The hand jive goes like this, with a partner:

For “double,” hit both fists on partners’ fists.

For “this,” hit both hands-on partners’ hands.

For “that,” hit back of both hands-on the back of partners’ hands.

All motions are to the beat.

At the time, I was still near Detroit (I lived in Michigan until I was 24.) Laura had the kids do the same chant, but with the words:

The chant could be changed to any team or any word with four sounds. I've seen this as a chant from Chile, with the word “Mariposa,” which is Spanish for butterfly. I've also seen it as “Chocolate” (pronounced Cho-co-la-tay, Spanish for chocolate.)

Last year, my second graders performed “Where the Wild Things Are,” shown below (click to see it in my store):

I had them perform the chant as “Chocolate” when the story spoke of Max being hungry, and then they made up other foods that had four sounds, like “Fettucine” and “pepperoni.”

This year, those same students, who are now third graders, are preparing their musical “B is for Buckeye” (more on that later.) We are performing the “Mariposa” chant as part of this program. Today, I had students brainstorm things that reminded them of Ohio that have four sounds. The class came up with a list, and one of them included Braxton Miller, who is the quarterback for Ohio State (people are CRAZY about their football here!) That would sound like this:

This chant could be used in so many ways, regardless of where you live or which team your students like! It's a great way to have students create, choosing their own lyrics.